As part of the grand finale of the World Cup Pub Crawl blog, we were all dispatched to various parts of the world. Pooch and Leah had France covered, as you've read below, and Kate was sampling the atmosphere in Italy. Dann, Fu, Arun and I had pulled the short straw and been packed off to Amsterdam to experience the World Cup final from a Dutch perspective. 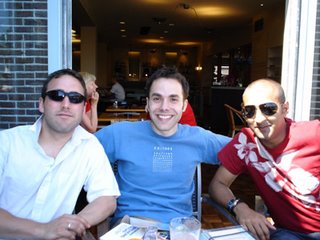 We immediately discovered that the main street had been decorated with flags from every nation in the World Cup, as had various other streets across the city. I couldn't spot a St George's flag but I'm sure it was there somewhere. 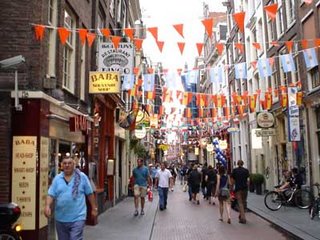 We watched the 3rd/4th place play-off in a small and friendly bar, with a few Germans dotted about. We had planned to go for Portuguese tapas beforehand but had run out of time as our attempts to beat the mythical 100 million mark on word-search got slightly out of hand.

Even though we were watching the BBC1 broadcast, the commentary was in Dutch. This was initially pleasing, as we felt it all added to the experience, but there were two problems with it. Not for the first time during our travels, the commentary was ahead of the pictures. This largely spoiled any suspense about whether the attack would culminate in a goal as the noise of the crowd and level of the commentator's excitement would already have given the game away. 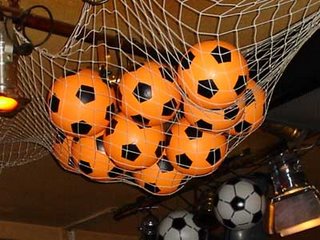 The second problem was that the commentary consisted almost entirely of the players' names. There was no analysis, which was fortunate for us since we wouldn't have understood it, but I'm surprised the Dutch put up with this week-in, week-out. I guess it must be for people with small TVs who can't tell who's on the ball...

We watched the final in a suitably packed bar with the French on one side of us and the Italians on the other. 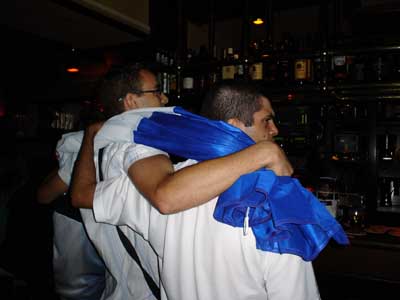 The Italians danced around crazily for quite some time afterwards. I actually thought at one point, "Alright - calm down", and then I realised they had just won the World Cup, and tried to imagine how they must be feeling. Will us poor England fans ever get to experience that feeling?!

The French fans took it well, remaining unsurprisingly silent - presumably dumb-struck by the drama of the Zidane incident and the penalty shoot-out. At least England go out on penalties before the final, so that we all know we would never have won it playing like that anyway. The French, much like the Italians 12 years ago, know that one missed spot-kick cost them everything. I don't think we're ready for that disappointment... 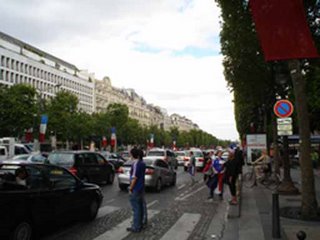 I've been here around six hours now, mostly spent walking round soaking up the atmosphere. What atmosphere though? No-one seems to know there's a football match on tomorrow let alone the FIFA World Cup final. I've only seen six people wearing French shirts, one of them being an English boy on the Eurostar and another was me. If this was London and England playing in the final I imagine there would be a sea of red and white everywhere

There seems to be little interest in the bars either, perhaps it will pick up tomorrow...

Last night Leah wasn't sure where we should watch the game, L' Hotel de Ville didn't seem to have a big screen up though I found out there was one at the Parc des Princes - quite a long way on the Metro though. So I started to ask everyone I met where they were watching it. Most of them said in a bar but it was the response of my (English) waiter at lunch which was most intriguing "Whatever you do, stay away from the Champs Elysees. I was there in '98 and it was mental, you won't be able to move after the game".

So I finished up my lunch, went back to the hotel to put my France shirt on and headed straight for the Champs Elysees. The buzz was phenomenal, people just seemed to be driving up and down papping their horns and waving drapeau tricolore: 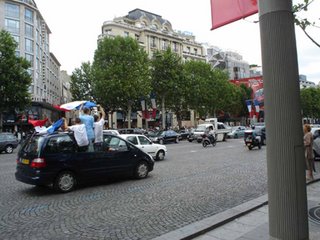 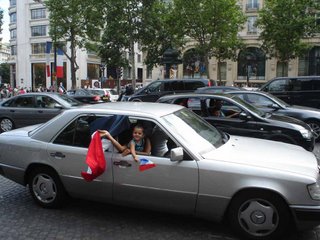 I saw quite a few cars pass me twice on my way from the Arc D' Triomphe to the Place de la Concorde and back, petrol must be cheap in France! I started to explore some of the side streets in an attempt to find a suitable venue - it wasn't too hard and I soon got cracking on the Kriek framboise beer and talking away to the French in the bar as best I could.

About half an hour before kick-off the bar started to get really packed, people were sitting in the street outside and watching the TV through a mirror in the bar. The riot police parked their van outside a bar opposite so they could watch. La Marseillaise was rousing and it soon became apparent that we had a trumpet, a drum and an air-horn in the bar - when France got and scored the early penalty all three were used to good effect and you could hear similar sounds echoing round the streets.

You all know the story of the game the crowd in the bard couldn't believe Zidane had been sent-off for the head-butt, they seemed to think it was harsh and I feigned some sympathy as it was clearly a lot worse than Rooney's transgression. "Zizou, Zizou" was chanted almost constantly for the rest of the game and we had another chorus of La Marseillaise during extra time as France looked like settling it before penalties.

Penalties did indeed arrive though and I thought about leaving lest I bring some of the English luck to mes amis. It was not to be and the bar emptied promptly and swiftly and I followed the herd to the Champs Elysees to sample the reaction: 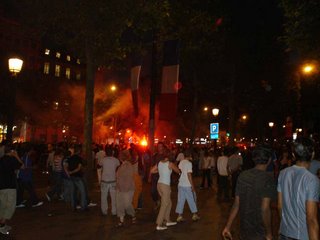 The crowd clearly weren't overly happy and the riot police looked a bit much for me so I fled pretty quickly back to my hotel. I don't think there was much trouble but I was just a little unsure which way things would go in such an alien country. I met a gaggle of Italians on the way back and they seemed a bit lairy at first but once I explained I was English and said "congratulazioni" a few times we had some hugs and on I went.

The French are an enigma to me, they don't wear their heart on their sleeve as much as us lot, it's a much more Laissez-Faire attitude. I had a wonderful time though and it was a fitting end to what for me has been an emotional and perhaps even life-changing four weeks.

I'll try and some it all up in the next few days, I can't really find the right word right now. 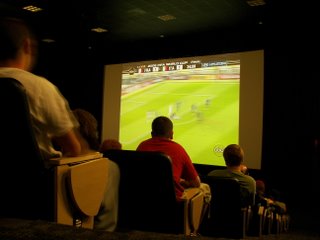 We saw the last game in a cinema! Every seat was taken by at least 200 local students. The atmosphere was vibrant with everyone shouting for either the Blues or the Azures. 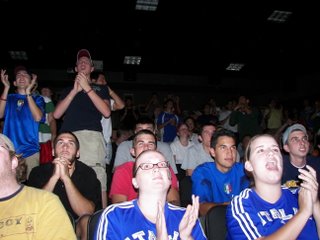 Each person responded to the mexican waves by standing up and throwing their arms in the air or tossing their heads back with patronizing sarcasm.

The tepid overtime period was enlivened by some indefensible violence from Zidane. It was thrilling to see the enthusiasm with which an experienced professional could tear up his ticket to to the pantheon of sporting heros.